This week on Monday, CCA was on the road in Brethren and won 33-24. Mackenzie Cole had 17 points, while Allie Angell and Jessica Cole each had six rebounds.

“The team is starting to come together the last three games,” CCA coach Jason Kostecki said. “We have had multiple contributors both on offense and defense. We knew this was going to be a tough week as Brethren and Manistee Catholic are both tough teams to play at, let alone win at.

“The kids are really focused at practice and are really working on our offensive sets to be more patient and getting better looks. Our defense has really come a long way, making it difficult for other teams to score. The girls have been working hard and I am very proud of them.” 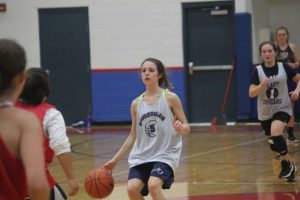 “We have a very big league game (Tuesday at home) as we play Mason County Eastern in league play,”Kostecki said. “They beat us by one earlier in the year at their place in double overtime.

“We know what we have to do to prepare for them and the next couple days at practice we will work specifically on some things that we want to execute both offense and defense Tuesday night at our place.”