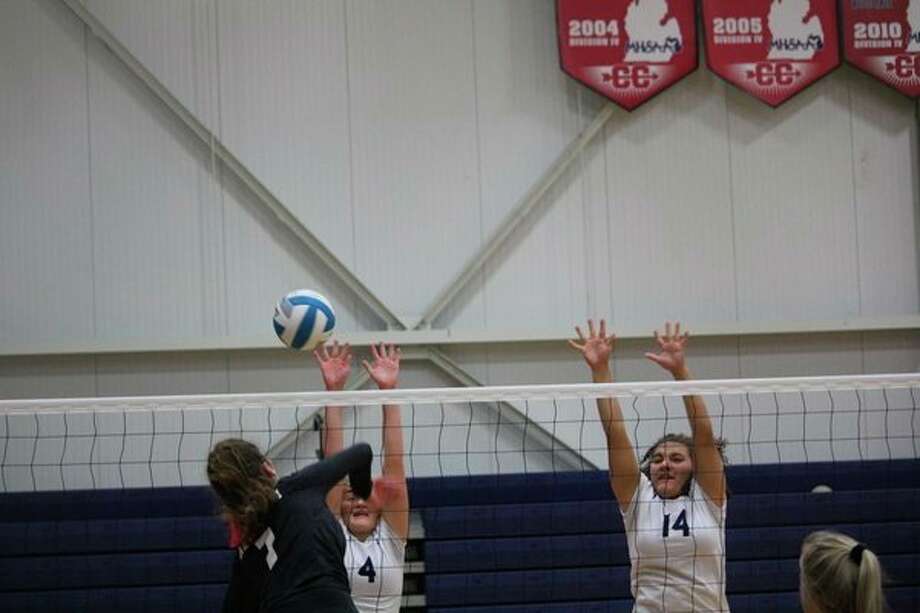 BIG RAPIDS — Crossroads and Reed City both made it into the semifinal round of Saturday’s CCA Volleyball Invitational.

But Onekama pulled out the title with a 25-9, 25-12 win over the Cougars in the championship match.

“We worked well together all day, but something threw us off and we couldn’t get into the groove we had for the earlier games,” Crossroads coach Kristin Yates said after the Onekama match.

Jada Meeuwes and Natalie Chapman had two kills each, Jacy Carlson scored two aces and Kenzie Cole had a solo block for the Onekama match. Against Reed City,

In pool play, Crossroads was 2-0 with wins of 25-11, 25-16 over McBain Northern Michigan Christian and 25-19, 25-18 over Manistee Catholic Central. Chapman earned nine kills and two aces while Jacy Carlson added three aces. Murray had four kills and Cole had eight assists. Against MCC, Cole serves the first 13 points of our first set and added one ace, three kills, and four assists to her stats. Natalie Chapman had five kills and three aces, and Jada Meeuwes had five kills and three solo blocks.

“Overall, this was one of our better tournaments,” Yates said.

CCA plays at Montabella on Thursday.

“I told the kids afterwards in a couple of games we played really, really well,” Reed City coach Don Patterson said. “Maybe as well as we’ve played all year. We have the consistency overall. We’ll need to focus on our serving. If we can pick that back up as we head into districts, I think we’ll be playing our best ball.”

Reed City is home with Newaygo on Tuesday.